Posted at 12:53h in e-invoicing, Electronic Invoicing by Pete Loughlin
0 Likes
Share
We started the new year with a conversation with Christian Lanng, CEO of Tradeshift who explained his grievances with OB10. They are numerous but they all boil down to one thing – interoperability. The arguments can become complex but at a simplistic level, there are e-invoicing vendors that embrace and encourage interoperability and openness between networks claiming it is best for customers and there are those that prefer not to having invested substantial sums on the infrastructure of their own networks. As an objective observer, what do we think? Which side of the interoperability fence would Purchasing Insight sit on? Actually, neither, because there isn’t a fence.
Read More

Posted at 09:12h in e-invoicing, Electronic Invoicing by Pete Loughlin
0 Likes
Share
Tradeshift appear to have a love/hate relationship with OB10 – although I think they may be in denial about the love part. And this is why I wanted to get to the bottom of it. I spoke to Christian Lanng, CEO of Tradeshift about his views on OB10. I expected Christian to be forthright and he didn’t disappoint so I’m pleased to present the conversation as it happened. There’s a bit of journalistic license in what follows but in essence this is our conversation. I make no judgment on Christian’s views. Some of it I agree with some I don’t but I’ll leave my detailed comments to a separate article.
Read More

Posted at 11:34h in e-invoicing, Electronic Invoicing by Pete Loughlin
0 Likes
Share
A few weeks ago in a blog post, I teased Christian Lanng, CEO of e-invoicing firm Tradeshift. “I get the feeling that Christian doesn’t like OB10”, I wrote. “Is it just me?” Tradeshift and OB10 are competitors so I would expect they would have different views but I get the feeling that Christian’s feelings about one of his competitors is a little more than professional. So when he offered to explain his views to me, I was more than interested.
Read More

Posted at 11:13h in Document Management, e-invoicing, Electronic Invoicing by Pete Loughlin
0 Likes
Share
Can I just make something very clear. I really liked the article by Laurence Buchanan on the Cap Gemini blog, Digital Transformations “What comes next after Facebook and Twitter”. I thought it was inspired and intelligent. I liked it a lot. That is until I read this sentence:  “How can we build stronger customer relationships based on true value co-creation ..”. Yet again, I thought, a fine piece of well articulated thought leadership drifts into pretentious clap-trap of self evident truisms using made-up words. Then I read this sentence: “How can we cut through vast quantities of unstructured customer data with accuracy and drive insight into action faster than the competition?”. Laurence Buchanan’s article had, for me, bounced right back. Suddenly, all is forgiven.
Read More

Posted at 18:46h in AP Automation, e-invoicing, e-Procurement, News by Pete Loughlin
0 Likes
Share
The dust hasn't settled on the decision by the UK to turn its back on the EU when a freedom of information request submitted by Basware makes it look like Great Britain is making a habit of being left out in the cold. While much of the world is embracing technology to reduce the cost of doing business, HM Treasury, the UK government counting house, still receives 80% of it's business invoices on paper and 83% of local government authorities are in a similar situation.
Read More

Posted at 16:20h in e-invoicing, Electronic Invoicing by Pete Loughlin
0 Likes
Share
This is the third in the series The World Map of e-invoicing focusing on Latin America. Latin America is rapidly setting the pace for e-invoicing. Although the level of adoption is behind many other countries, the rate of increase in adoption is extremely rapid and mainly as a result of government sponsorship. Governments are supporting the growth of electronic invoicing by mandating its use and  removing the standards discussion by dictating the form of invoice and the associated digital signatures. 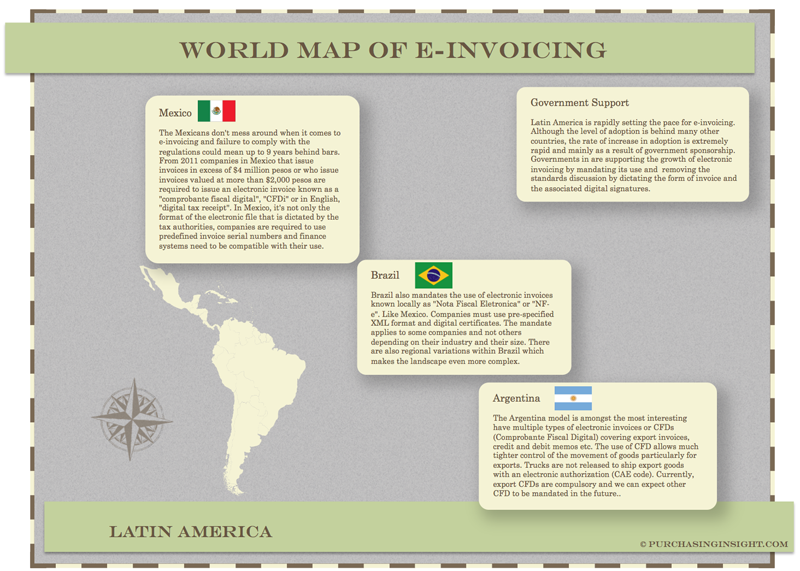 Posted at 14:38h in e-invoicing by Pete Loughlin
0 Likes
Share
I read with great interest Christian Lanng’s response to Friso de Jong’s recent article on e-invoicing and digital signatures. I get the feeling that Christian doesn’t like OB10. Is it just me?
Read More
This site uses cookies: Find out more.