The future of e-invoicing. Can facebook teach us anything?

21 Dec 2011 The future of e-invoicing. Can facebook teach us anything?

Can I just make something very clear. I really liked the article by Laurence Buchanan on the Cap Gemini blog, Digital Transformations “What comes next after Facebook and Twitter”. I thought it was inspired and intelligent. I liked it a lot. That is until I read this sentence:  “How can we build stronger customer relationships based on true value co-creation ..”.

Yet again, I thought, a fine piece of well articulated thought leadership drifts into pretentious clap-trap of self evident truisms using made-up words.

Then I read this sentence: “How can we cut through vast quantities of unstructured customer data with accuracy and drive insight into action faster than the competition?”. Laurence Buchanan’s article had, for me, bounced right back. Suddenly, all is forgiven.

Arguing in a blog that social media is real or important is like preaching to the choir. The question that many are asking is the question that Laurence addresses – what next? And I agree with his conclusion that it’s the wrong question to ask. If you think you know the answer, you didn’t understand the question in the first place. It’s the nature of these things. They can’t be predicted. The fact is, if you can see a band wagon, it’s already too late. What we can do however is to examine the essence of social media to try to learn why it works, understand what we need to do to make it work better and to our advantage and in a B2B context, the treatment of unstructured data gives a clue as to how we can leverage the social media lessons.

Before facebook, you needed some basic skills to operate a computer – one was to be able to read and write. One of the biggest successes of social media is the access to the internet it has given to people who were previously denied it. You don’t have to be computer literate to take part. You don’t even need to be literate literate. There is a clear lesson from this. In order to achieve mass adoption, you can’t expect people to adapt their behavior to meet the needs of the technology. You have to adapt the technology to fit in with the behavior of users. That’s obvious advice isn’t it? If it’s that obvious, why is it almost never heeded?

The e-invoicing lesson from social media

Why is it that despite a decade of experience and the overwhelmingly obvious benefits of electronic invoicing, we’ve only scratched the surface? Sure, some of the biggest organizations in the world have embraced it – the ERP literate – but there are plenty of large organizations that haven’t and a huge proportion of smaller companies that haven’t and aren’t about to any time soon. It’s hardly surprising. Businesses are managed by people and people don’t think in terms of structured data. A handwritten note that says “you owe me $5” can be understood by anyone. A printed invoice is made a little more complex. An EDI message means nothing. By insisting on standards that were developed in the 1990s, we’re trying to get business to adapt to the technology rather than adapting the technology to business. 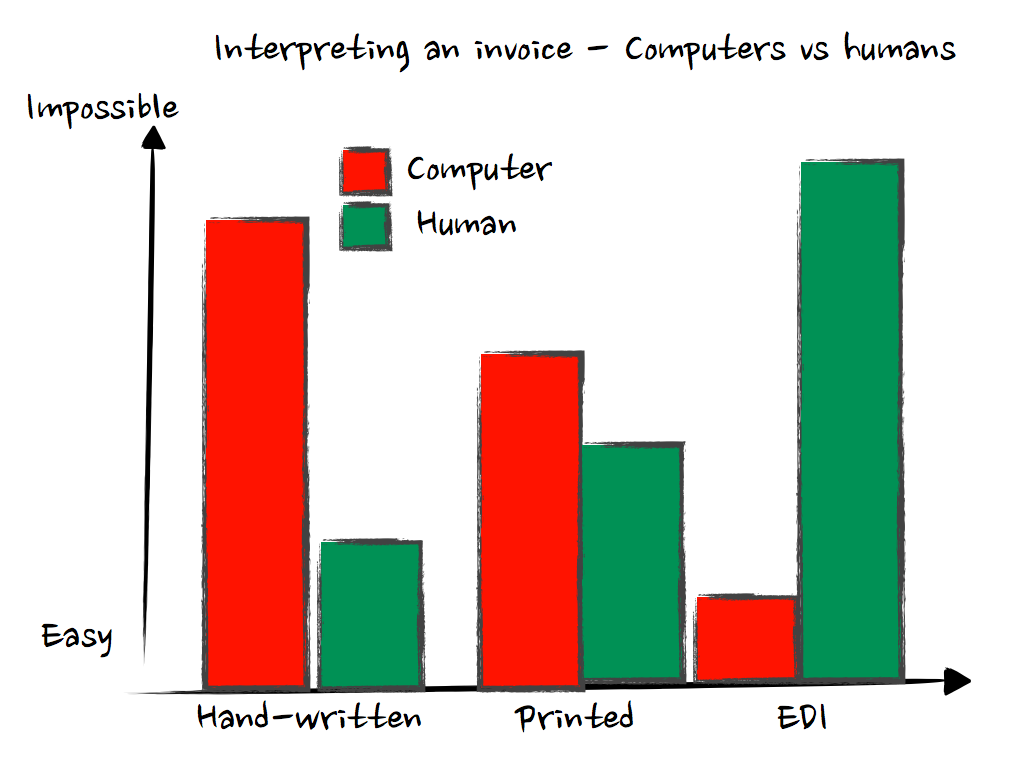 And it not good enough to declare that companies need to become more tech savvy. It’s like asking grannies to learn MS DOS. If we are to learn the social media lesson we need to remember that grannies stopped being afraid of keyboards and mice when they learned that they could use facebook to see photos of their grandchildren and click ‘like’. It needs to get simple first then people will seek the rewards.

So what is the way forward? Is it something like Tradeshift? I’d say ‘yes’ and ‘no’. It’s as easy to sign up for Tradeshift as it is to sign up for twitter and amongst all B2B service providers, Tradeshift are about as good as it gets at utilizing social media for marketing but Tradeshift is just an early iteration and besides, social media isn’t the end game. The end game is mass adoption and that is only going to happen when finance systems mirror finance processes, when we stop being reliant on standards dictating our business processes, when we accept that we cope with structured and unstructured data and when we accept it’s OK to say that.

To those who would say “of course we need standards” – and you know who you are – let me remind you  we’ve been trying this for 10 years. The benefits case is overwhelming. We’ve achieved 15% market penetration. Once bitten twice bitten? How does that make sense?

It’s a prediction for 2012 and it’s partly informed by looking at the mass adoption of personal technology and it’s partly informed by what is actually happening in the real world now. Businesses are embracing a hybrid approach to e-invoicing, accepting PDF files on equal terms as structured XML and EDI messages. We’ll increasingly pander less to the needs of the technology and pay more attention to ease of use and existing ways of working. Technologies like document management and intelligent data capture will be seen as current rather than archaic and we’ll hear less about standards and more about enjoying the compelling benefits of e-invoicing.