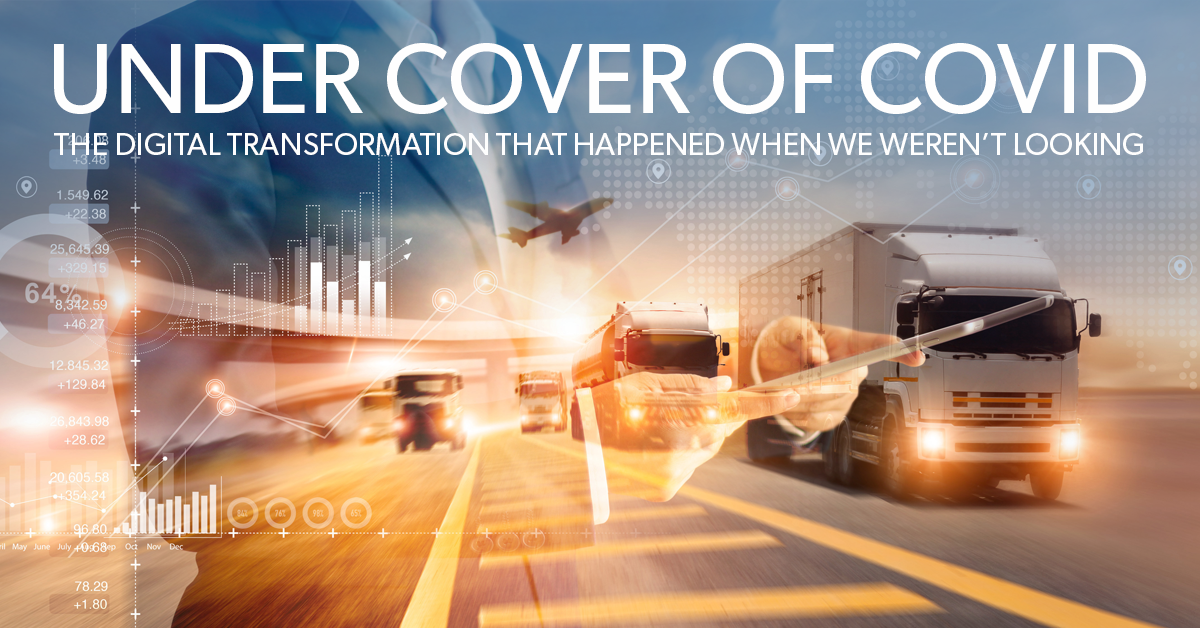 Posted at 19:20h in Digital Transformation by Pete Loughlin

We thought we knew it all. We equated globalisation with progress – but this has now gone full speed into reverse. The brakes haven’t been put on. The global economy has careered into a hairpin bend. It is now accelerating full pelt towards the technology powered ecosystem supported by responsive and agile supply chains that we have for years been kidding ourselves that we already had.

Hold on to your hats. You ain’t seen nothing yet!

Hold on to your hats. You ain’t seen nothing yet!

There has been a remarkable series of events in the last 12 months that will leave indelible traces. And quite apart from the human and political upheavals we’ve witnessed, big economic transformations that were underway already are now rapidly crystalising under the cover of COVID. It’s no secret. We’ve been celebrating the digital economy like it had already arrived for years but now it’s really happening, we’d better make sure we’re prepared.

Globalisation had already slowed down. The political forces that we saw in North America driven by popular support to bring jobs back home bear a close resemblance to the spirit of Brexit and whether or not they are the driving force or merely symptoms of something else, more manufacturing jobs and their supporting supply chains are becoming more local. COVID has accelerated it. In Europe, sourcing closer to home has been the saviour of some retailers who have been able to maintain supply to a consumer market that has become accustomed to the availability of rapidly evolving fashion as their competitors’ global supply chains, paralysed by the pandemic, have stalled.

Big economic transformations are rapidly crystalising under the cover of COVID

Robotics have enabled motor manufacturers to finalise a century long transition from mass automation to mass customisation. This is familiar. What is new is that motor manufacturers are now making robots. That’s perhaps a stretch but GM’s recently announced BrightDrop does just that. Alongside it’s electric powered delivery vehicles it is making autonomous electric palettes – a type of cooperative robot (Cobot) to support warehouse workers. According to The Economist, the global market for industrial robots is expected to rise from $45bn to $73bn in the next four years. This is certain to allow manufacturing businesses to bring jobs back home but not necessarily the kind of jobs that there used to be. Cutting out labour costs is part of the formula that makes deglobalisation work.

The digital transformation that was promised is here

The unthinkable is becoming reality. Many of us who have been working from a home office for years have fully understood how remote working can operate successfully but we’ve also acknowledged that the mountain of change that would be needed to overcome the challenge to shut down large offices en masse was too big to contemplate – until 2020. To quote Samuel Johnson, when a man knows he is to be hanged in a fortnight, it concentrates his mind wonderfully.

UiPath has a number of very interesting applications of their RPA solution that I can see being very powerful in supporting implementation projects including AP automation and Source to Pay.

It is a fallacy to think that robots will be restricted to the factory. The new GM warehouse Cobots are proof of this but the use of robotics goes far, far deeper. Like many, I have been sceptical about the application of robotic process automation (RPA) in back office functions with the exception of a few use cases but that list of use cases is getting longer and the sophistication of RPA is growing so I’m now changing my view. UiPath has a number of very interesting applications of their RPA solution that I can see being very powerful in supporting implementation projects including AP automation and Source to Pay. But if you are in any doubt about the future of RPA, consider that UiPath’s IPO, filed in late 2020 is expected by some commentators to open at $20bn.

This isn’t a New Year crystal ball gazing, speculative discussion. These things that many have been predicting for a long time are actually happening. It’s not optimistic predictions or bullshit. But to those who remain sceptical, to those that say that this isn’t exactly the digital ecosystem of joined up demand planning, supply chains and inventory optimisation that the management consultants have been peddling for years, here’s one more gem from China.

It’s coded named Xunxi – Fast Rhino. Alibaba has built a full end to end integrated value chain – design, procurement, manufacture, logistics and aftersales care which it is claimed reduces production to delivery cycle from months to weeks. This is the holy grail of e-commerce. This is what was seen in the mirky pool of the future in the 1990s. This is what we said could be delivered and now it is happening.

Fit in or fade away

The future has arrived. It was always on the invitation list but it’s made entrance by the side door while we were looking the other way. Fully integrated end to end digital value chains will become the dominant theme of the decade and every business needs to shape itself to fit in or fade away.