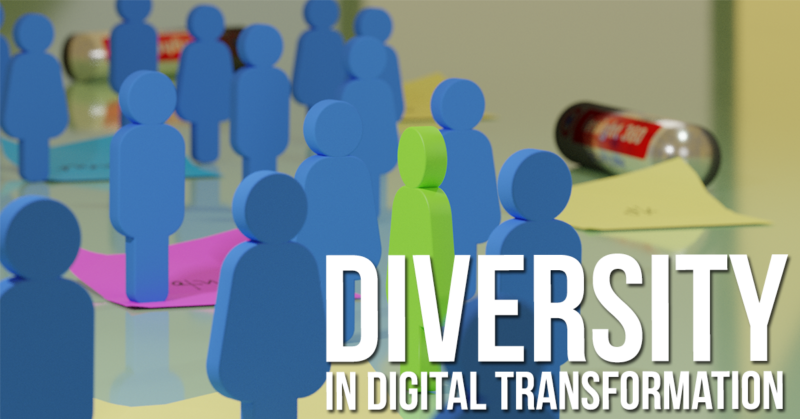 Posted at 13:57h in Digital Transformation by Pete Loughlin

Have you ever felt isolated in a business meeting? Like you are the only one thinking straight? You’re out on a limb, standing alone with ideas, experiences and insights different to everyone else. It’s uncomfortable. It isn’t easy to be that person and to challenge the conventional wisdom but it is the only way to create effective change.

Designing a new set of business processes as part of  a digital transformation programme is easy if you keep everything the same. It’s the changing part of transformation that’s difficult. But as a rule of thumb, the more difficult the change is, the more likely it is that you’re doing something right. It should be challenging. No gain without pain. It’s clichéd to say you should step out of your comfort zone and it’s not saying anything insightful to claim that to effect change you have to do something different. You have to think out of the box (to use another cliché) but despite these strategies being kind of obvious, very few organisations and teams actually do this in practice when they are challenged to design new business processes as part of a system implementation project.

Too many organisations rely on their own wisdom to redesign business process when they should be seeking ideas from outside. Bringing outsiders in with new insights, fresh ideas, alternative ways of doing things – even if they’re not necessarily the best ideas or the ideas that you will take forward – is unsettling. It can cause conflict. It threatens the status quo and it doesn’t feel like it respects the wisdom of years of experience that has built the current ways of working. Consensus becomes difficult and decisions are difficult to reach. But isn’t this what we mean by stepping out of your comfort zone and thinking out of the box? When we don’t welcome fresh input, isn’t this a great example of good advice that we’re happy to give but we rarely follow? It’s painful to take criticism. No-one wants to lose their silverback status in a meeting. But to make effective decisions, it’s necessary. And it works.

Too many organisations rely on their own wisdom to redesign business process when they should be seeking ideas from outside.

There was an interesting piece of research done in 2009 by a team led by Katherine Phillips* from Columbia University about diversity and group decision making. Teams were asked to work together to resolve a murder mystery. Groups of similar social background were put together to collaborate, understand and discuss the mystery and to choose ‘who done it’. After 5 minutes of discussion, each team was joined by an additional person. In some teams, the new participant was in the same social demographic as the existing group while in the others, the newcomer was from a different social group. As you might expect, the now diverse groups became less aligned in their discussions. They struggled more to reach agreement and they felt less confident of the consensus they eventually reached. In contrast, the homogenous groups were able to reach consensus more quickly and confidently. But more often than not, the confident consensus was incorrect. The diverse groups got it right even though it was harder to reach agreement.

This research provides objective evidence of what many of us already knew. Organisations that try to transform themselves without opening up to new ways of thinking, rarely transform successfully. They retain pride in their heritage and their culture – which is great if the heritage and culture are things to be proud of – but they don’t adapt to changing times. The fact is, what was best practice yesterday isn’t necessarily best practice today.

The NHS in the UK is one of the largest organisations in the world (it is the fifth biggest employer behind the US and Chinese armed forces, MacDonald and Walmart) and it has a very proud culture. And quite right too – they have a lot to be proud of. But they are also the biggest buyer of fax machines in the world according a study published in 2017 which claimed this to be symptomatic of a reluctance to embrace new, digital solutions. Outsiders who enter the NHS with intent on bringing innovation and change will often leave with the words “that’s not the NHS way” ringing in their ears.

When consultants are brought in on the back of a transformation program their impact is rarely effective. They often go native and focus on getting the system in safely rather than continuing to challenge incumbent thinking.

But it’s not all the fault of organisation that is attempting to make transformational change. Even when consultants are brought in on the back of a transformation program their impact is rarely effective. Yes, at the outset, during the sales process, they’ll paint the grand picture of how they will deliver change and take their prospective client on a “change journey” but the reality is that soon after the consultants land, they go native and focus on getting the system in safely rather than continuing to challenge incumbent thinking.

I’ve seen this many times. The KISS message (Keep it Simple Stupid – my all-time least favourite acronym) is declared loudly at the outset. “Don’t change the software to fit your business processes, change your processes to fit the software. Adopt rather than adapt the software”

Contemporary solutions offer best practice out of the box (or at least that’s the claim) but as soon as you get to design the configuration the consultants, in the interests of time often enough or just for an easy life, revert to “the customer’s always right” mode – even when the customer’s wrong. Only when the organisation gets stuck in a particularly trick business process do they resort to speaking to outsiders for help and support who, oddly enough tell them: “Keep it simple stupid”.

“Because we’ve always done it that way” is the worst reason for doing anything even when it’s the right thing to do.

With any digital transformation or system implementation that involves significant change, the design process should feel uncomfortable. If it’s easy, you’re probably doing it wrong. It’s like finishing an exam way ahead of time – it’s likely you’ve missed something. Bringing new, disruptive ideas into the change process works, even if it slows things down a little, even it causes some discomfort. It forces you to justify why you do things today and helps you to examine the status quo more thoroughly. “Because we’ve always done it that way” is the worst reason for doing anything even when it’s the right thing to do. You need to know why you do it, be able to explain why and to answer challenges.

In an essay in Scientific American Katherine Phillips wrote: “The first thing to acknowledge about diversity is that it can be difficult”. She acknowledged that diversity often provokes discomfort, conflict and more challenging interactions but through her own empirical research, she showed that diverse groups work harder, consider a wider range of view and importantly, deliver better outcomes.

Katherine W Phillips died Jan 15 2020. She was aged just 47. She should be more widely known and appreciated.