At a time when the global economy remains uncertain, lending difficult to secure and the light at the end of the recession tunnel still somewhat ambiguous, spending millions of dollars on new IT is not a high priority. For small to medium sized businesses (SMB) it is unthinkable. Only fool would do it. But doing nothing isn’t an option.
In order to ride a recession, businesses need to manage their cost carefully in order to emerge at the other end intact and ready to grow when the economy revives. But doing so without shrinking the business and taking backward steps is a challenge and an investment in IT is simply not a possibility.

This is why the Software as a Service model (SaaS) for supplier relationship management is a perfect fit right now for many businesses.

Optimization of purchase to pay processes is a proven way to eliminate operational costs. A combination of process changes enabled supplier relationship management tools like e-procurement software while generating a significant return on investment, is traditionally been expensive and time consuming to implement. But take a look at the comparison between the business case for e-procurment comparing an in-house solution to the SaaS model. 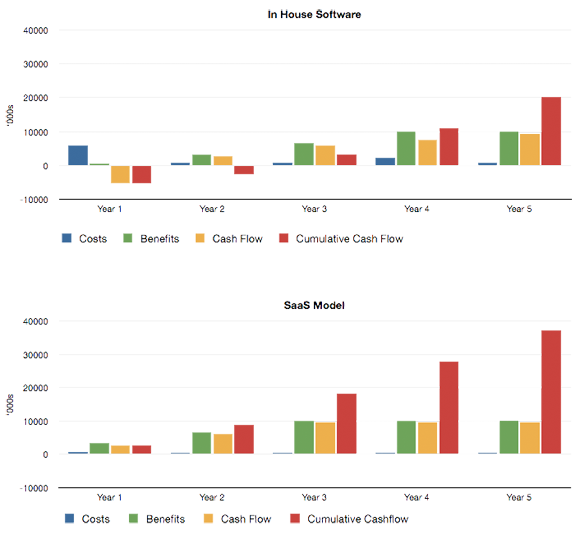 The savings generated are identical but crucially, the ROI using the SaaS model is significantly quicker and the costs dramatically lower. This means that SMBs can enjoy the same operating cost model as big players without the huge investment in IT. It levels the playing field.

The availability to SMBs of true industrial strength applications like SAP via a hosted model has been talked about and promised since the 90s but it is only now that that vision is becoming reality. Look for example at Hubwoo’s hosted SAP SRM 7.0 offering, eBuy Procurement. eBuy is powered by SAP software which lies at the heart of the Hubwoo solutions offering. The release of eBuy 7.0 includes standard functionalities of SAP SRM 7.0 in addition to  powerful On-Demand features. Hubwoo boast that eBuy drives down the Total Cost of Ownership while accelerating the technology investment for all of their customers.