Build or Buy decision tree for Purchase to Pay 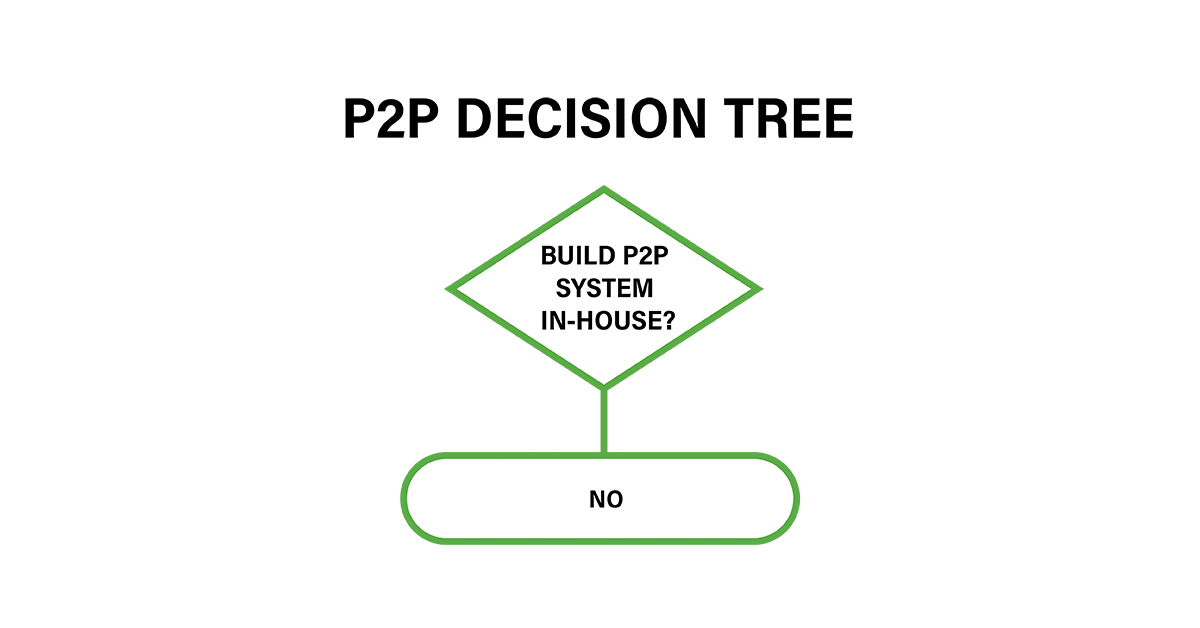 Posted at 12:58h in Procurement Software, Purchase to Pay by Pete Loughlin

While I’d like to say that it’s a complex decision – it isn’t.

“Never” is a bit strong. While I’d go so far as to claim that contemporary P2P best practice can be applied universally across all categories in all industries, I’d concede that that is a good approximation rather than 100% true 100% of the time. There are exceptions. When I say “all categories” I refer very specifically to indirects. And when I say “all industries” I accept that some are bound by very specific regulations and circumstances (such of national security) where the “normal” rules don’t always apply. And I also recognise that I silently reference “most of the world” meaning most western economies – some of the largest economies operate in unique ways that the off-the-shelf solutions don’t yet accommodate fully.

But to be clear, despite the exceptions, when it comes to acquiring a P2P solution to address indirect spend, for nearly all businesses, the build or buy discussion is now redundant.

Enterprise software is less than a generation old. It depends how long you think a generation is but there are people still not retired who remember a completely computer-free work environment where accounts were kept on paper and where communication was by letter and handwritten memo. Rules and regulations relating to tax assumed that all documents like invoices were paper and today still, many tax authorities require that these messages are still communicated on physical pieces of paper. In the 1970s – recent living memory – when it came to enterprise software, the question of build or buy never came up. You had to build because no solution existed.

To be clear, despite the exceptions, when it comes to acquiring a P2P solution to address indirect spend, for nearly all businesses, the build or buy discussion is now redundant.

Over the following two decades in-house built enterprise applications morphed into what we think of as ERP platforms today. The term Enterprise Resource Planning of now a complete misnomer that is a general label for the industrial strength software that supports, powers and controls almost all of the generic aspects of large businesses. Applied to the core parts of an operation, it can be highly customised to meet industry specific needs and enhanced by new built software to support new and innovative requirements. At the back end of the business, the mundane generic business processes like accounting, HR management, and indirect procurement are supported by robust and sophisticated applications that, while highly configurable to meet a wide variety of different circumstances, are standard, off-the-shelf products.

In the third decade of the 21st century the question of build or buy still comes up only now, there is a wide variety of highly specific software applications available to choose from. When facing this question, you need to ask yourself if the problem you are trying to address is new, uniquely different or so rare that a suitable solution doesn’t exist already. You may be drawn to the build option if your problem is surrounded in such special circumstances, for instance national security, that off-the-shelf software simply can’t be used. Or, is there a new idea or approach (such as blockchain) that allows you to take existing solutions to a new level?

The business case for outsourcing back office software has been done to death. The cost of supporting inhouse the software and infrastructure for standard business processes including indirect procurement and payment (P2P) is unsustainable in a modern competitive environment. Unless you live in a bubble unaffected by external competitive pressures to control and reduce cost the cloud question is one of timing – “when”, not “if”.

And it is largely the same rationale that should be applied to the build or buy question for P2P. The development costs could be huge. The ongoing support and maintenance cost never ends – and that is before you consider whether the software you build in house will be anything approaching best practice.

Unless you are a dominant player in your industry that can dictate the terms on which you do business with suppliers, it can difficult enough to persuade suppliers to send invoices via a recognised supplier network. What will suppliers think if you ask them to interoperate with your proprietary application? It will be like trying to sell tickets to fly in your in-house built airliner.

For Purchase to Pay software, when asking the question build or buy – the answer is buy. But for every rule there are exceptions and some of them are legitimate.

In the early days of enterprise cloud applications, security was often cited as a reason to at least hesitate. This is still a perfectly good area of scrutiny and indeed privacy and the potential to unscrupulously use private data remain important factors. On an individual level we worry about how our personal information is used, on a corporate level, competitive advantage needs to be guarded. At a global political level, countries remain circumspect in their attitude to data hosted in territories other than their own.

Security is a perfectly valid concern and while most solution providers can tick all of the right boxes it is right to keep asking the questions and gain reassurance – not just of third-party software providers but of any third party.

Some categories are easier than others to address using automated P2P processes. In the early days of P2P solutions this was enough reason to build applications for some categories that were not catered for. Today, what were once seen as complex categories like services are now seen as standard. While there remain a few stubborn categories, the list is getting smaller. These difficult categories are not typical or representative of indirect as a whole and rather than being a reason not to buy a solution, they are better seen as exceptions to be addressed separately.

Remember also that the P2P software is designed to be limited in scope. Generally, it is the indirect buying channels only that can be addressed. Some direct categories can be catered for but the procurement of any products and services that are associated with complex supply chain processes and mission critical business requirements are often better left out of scope.

It is very difficult to get people to adopt what is presented to them as “best practice” when that best practice is very different from their own existing way of working. It is completely understandable that if things have always been done in a particular way then it is difficult to change in order to fit in with a new, externally defined better way. Whether it was defined in an ivory tower or by a software provider, it’s not easy to take on board best practice out of the box if it represents a significant change. But this is a challenge that needs to be overcome.

If the reason to build a solution rather than buy is to ensure that the status quo is preserved; if the objective is to build around existing practice, then you need to have a long hard think about what you are trying to achieve. World class P2P is not about automating existing practice it is about adopting new ways of working in order to take advantage of efficiencies. Challenging the old mindset is part of the change process and is a positive reason to buy rather than build.

So why are you even asking the question?

Before you answer the question, ask why you’re even asking it. If you were buying a fleet of motor cars you wouldn’t consider building them yourself would you?

In the context of P2P, buy or build is a somewhat dated approach. Why, when most of the largest corporations in the world are adopting a cloud approach to P2P, would you go against the grain? It may be an important decision gate to get through but … really?

But within any large organisation, vested interests more often than not, dictate the direction of travel. Who would be affected by a build or buy decision and how powerful are they? Is the IT empire so influential that they will succeed in blinding the business with science and retain ownership of anything remotely connected to technology? And what about the auditors? They are (quite rightly) above the business when it comes to policing purchase to pay practice. And what about the business itself? If procurement or finance are the junior partners, how can they champion change if the people at the coal face resist?

Yes, you know your own business better than anyone else and yes, you’re unique – like every other business is unique – but don’t make the mistake of thinking you’re uniquely unique. Remember, it’s the procurement of non-direct materials and services that you’re looking to manage and whether you feel comfortable with it or not, its a generic set of back office processes much of which are dictated by independent standards conventions and regulations.

Managing non-core activities in house makes as much sense as building your own airliner – unless of course that is your core business. There are people and businesses that do this much better than you, they’ve done it multiple times in multiple circumstances and to think that you can do it better is most likely to be an expensive mistake that you make before you do it properly.