I wasn’t expecting a drama but when Sarah Chilman rushed to Nigel Taylor’s rescue following what appeared to be an unprovoked attack with a coat stand, I immediately thought of Wendi Deng’s intervention at the phone hacking hearing when her now estranged husband, Rupert Murdoch, was the target of Johnnie Marbles. “Surely Parliamentary business isn’t always like this” I thought but quickly realised that the coat stand had simply fallen on Nigel’s head.

It was a moment of distraction during an otherwise fascinating session, the first sitting of the UK Parliamentary Inquiry on e-invoicing. 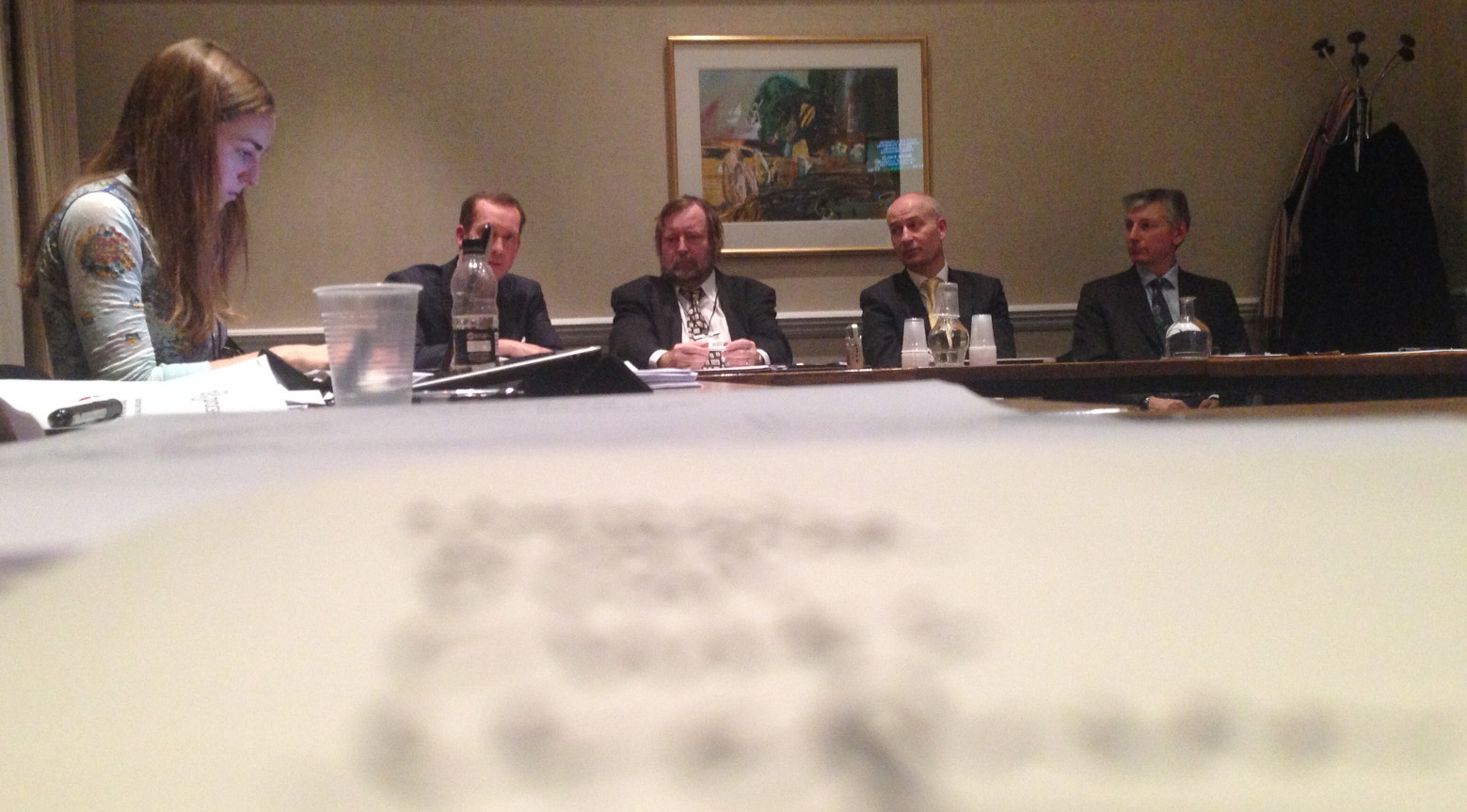 From left to right, Caitlin the stenographer, Luke McKeever from OB10, Tim Coleman from the Federation of Small Businesses (FSB), Nigel Taylor from Taulia and Chair of UKNeF, Nigel Clifford from Procserv and to the far right, the coat stand.

The coat hanger mishap wasn’t the only surprise. The Inquiry that I was privileged to be a part of, sat on Tuesday of this week, the day after an intense, all-day debate hosted by the UK National e-Invoicing Forum (UKNeF) during which I sat with Ian Burdon and Peter Smith, both of whom brought fresh and expert views and insights to the public sector e-invoicing discussion. These two days, the UKNeF meeting and the Parliamentary Inquiry, led me to some conclusions about the direction of electronic invoicing in the UK and they were conclusions that I would absolutely not have predicted.

My preconceived idea was that the UK Government needed to be persuaded to mandate e-invoicing. Mandate the use of electronic invoices by all public sector suppliers perhaps. Maybe insist on it as part of every new contract award. Whatever sort of mandate, it needs to be stronger that the soft mandate emerging from the EU Commission that is looking to require that all public sector organizations must not refuse to accept invoices in electronic format. That’s a little bit half-hearted in my view.

If I’d have been asked to predict the outcome of a show of hands when the UKNeF participants were asked to vote on whether there should be a mandate, I’d have expected the raised hands to outnumber the rest by a healthy margin. But no. When the Chairman Nigel Talyor did just that – it was a split audience.

“How can you possibly mandate that electronic invoices be sent to organisations that can barely process paper invoices properly?” asked Peter Smith. (I paraphrase.) And what exactly do we mean by a mandate? Mandate what? A standard? A particular solution?

Getting e-invoicing to happen will require encouragement and it will require leadership but more than anything else it requires political will and that means packaging the messages in a politically acceptable way. After the witnesses had made their submissions, Stephen McPartland crafted, on the fly, arguments that would be universally acceptable. It was impressive to listen to his analysis of the political perspectives of his own party and also of his opponents. This is a skill I haven’t got and it was a really interesting lesson in messaging. The expert view, even the common sense view, isn’t always going to be the one that sells the solution.

Asking for a mandate for e-invoicing is too simplistic but that is not to say a meaningful mandate of some sort is not required. There’s serious money to be saved by embracing digital business processes. We can’t quite agree on which efficiency savings figure is the closest to the truth but we all agree, to borrow OB10’s Stefan Foryszewski’s way of putting it, that whatever the number is, it’s a big number. And while we watch the Latin Americans’ making their own economies more efficient, making it easier and cheaper to do business with them, we in the UK need to take a serious look at our position in the world and consider the consequences of further prolonged deliberation.