We have highlighted many times the challenges of working capital management. It’s become a cliché to refer to the “perfect storm” – the combination of virtually zero interest rates and constrained liquidity that gives both cash rich, large businesses and cash strapped suppliers a headache. But every cloud has a silver lining. Better working capital management provides an opportunity and now, REL, the specialist working capital arm of Hackett, has revealed the size of the prize, in Europe – a total of €762bn is tied up in excess working capital – equivalent to 6 per cent of EU GDP!

REL recently surveyed the published accounts of more than 800 of Europe’s largest listed companies and found them to be sitting on €762bn in excess working capital. The biggest opportunity for companies lies in improving receivables, which represents approximately 36 per cent of the total working capital opportunity. €272m is available within receivables, €257m in inventory and €232m in payables.

Working capital has risen up the agenda of Europe’s largest listed companies in the last year but REL has found that they are still struggling to convert sales into cash.

Quoted for the press release alongside the publication of the research, Daniel Windaus, REL’s managing director said “the improvements show that companies are more conscious of the importance of working capital in the post-crash era, but they represent little more than a token effort in the grand scheme of things.

“Cash conversion performance has been declining for three years in a row, showing that efforts in working capital management have not been sufficient to counteract the squeeze on cash generation. Add to this the increase in debt levels and it’s clear companies need to be extremely alert to the possibility of interest rate increases and the impact these would have on debt leveraged portfolios.”

I spoke to Daniel Windaus last week to get a deeper insight and asked him what businesses should do to take advantage of the opportunity.

“There’s a noticeable and widening gap between the leaders and the laggards” he explained. “Of over 800 companies we examined, only 103 had improved their working capital position consistently and only one had improved all the working capital metrics, payable, receivables and inventory.” 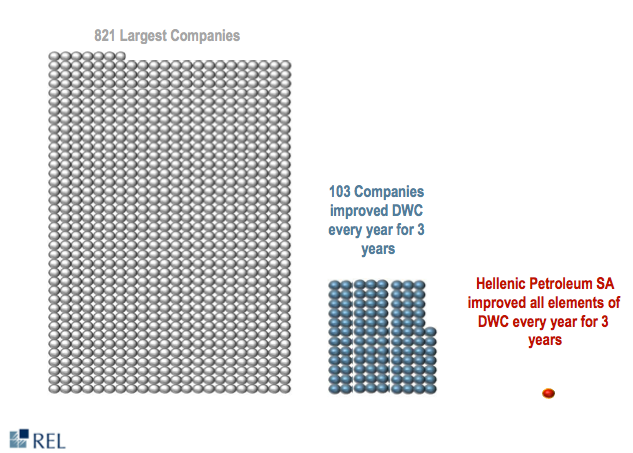 Getting businesses to understand the impact of better working capital management is a challenge and even if you can distill what is a very complex technical field, into a straightforward message, the next challenge is to persuade businesses to remove their blinkers and take a holistic view.

Daniel agreed. “Everyone understands that more sales is good. They understand that big margin is better than small margin. But getting them to understand the importance of working capital management is difficult.

“Business should focus on all aspects margin, cash flow, efficiency and so on and they must avoid simply moving their working capital cost from one part of their business to another  – a consequences of stove pipe mentality that many businesses suffer from.”