Posted at 16:22h in e-invoicing, Electronic Invoicing by Pete Loughlin

This is the fourth in the series The World Map of e-invoicing focusing on Asia Pacific.

With many aspects of the economies and cultures in Asia and the far East, it is a mistake to make direct comparisons with the West. While the eastern economies have very skillfully learned to adapt to do business with the West in a western way, the fundamental cultural differences remain and the way eastern businesses deal with each other can be difficult to fathom through western eyes. Indeed, expert analysts observe that as the balance of power tips toward the eastern economies, it is increasingly apparent that the East knows much more about the West than the West knows about the East.

Trying to understand China’s attitude to electronic invoicing is a case in point. The simplistic view is the China does not allow e-invoicing. No it doesn’t – at least not in the sense that the Europeans and North Americans would think of e-invoicing. But China has one of the most sophisticated and large scale e-invoicing programs in the world. Since 1994 the Chinese tax authorities have been developing what is known as the Golden Tax Project. The focus is on VAT compliance between businesses and government rather than business process efficiency between businesses themselves and it is not dissimilar in intent to the e-invoicing initiatives in Latin America. European and North American governments would do well to look at China to understand the fiscal payoff of a centrally sponsored e-invoicing program. 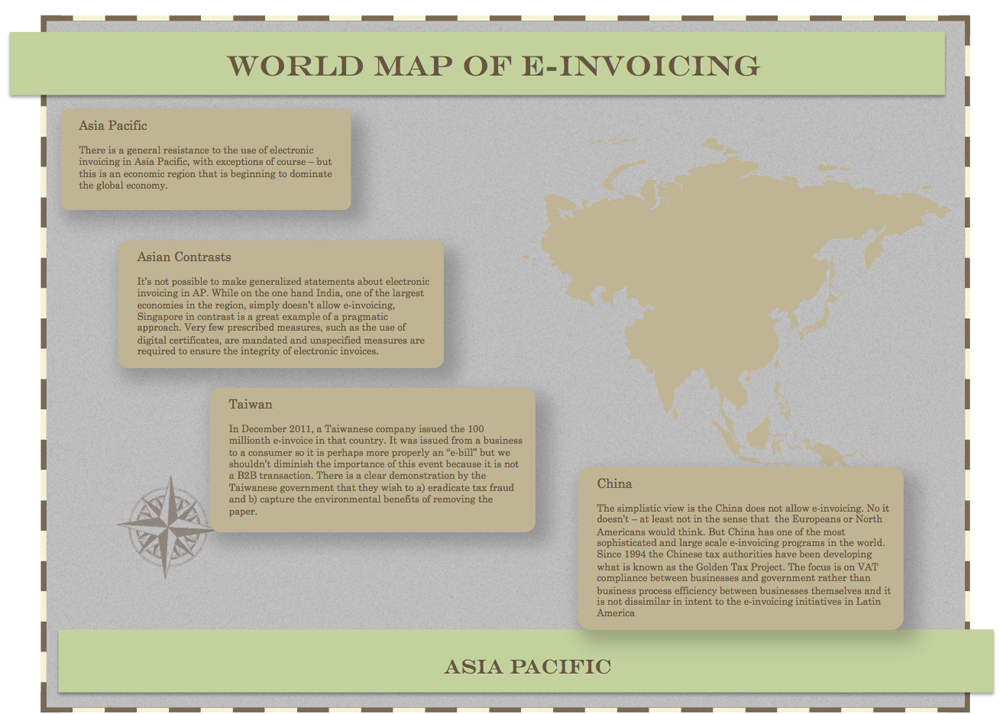 It’s not possible to make generalized statements about electronic invoicing in AP. While on the one hand India, one of the largest economies in the region, simply doesn’t allow e-invoicing, Singapore in contrast is a great example of a pragmatic approach to e-invoicing. Very few prescribed measures, such as digital signatures, are mandated however unspecified measures are required to ensure the integrity of electronic invoices.

In December 2011, a Taiwanese company issued the 100 millionth e-invoice in that country. (See this article at e-invoicing platform). It was issued from a business to a consumer so it is perhaps more properly an “e-bill” but we shouldn’t diminish the importance of this event because it is not a B2B transaction. There is a clear demonstration by the Taiwanese government that they wish to a) eradicate tax fraud and b) capture the environmental benefits of removing the paper.