Who needs banks when we can have Banksy? 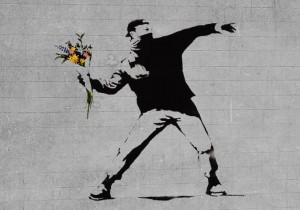 Something familiar out of context can have a dramatic impact

Joe Hyland, CMO at Taulia, recently wrote an excellent piece about industry disruption in which he highlighted three of the characteristics of a truly disruptive strategy. Essentially, Joe advises: 1. Don’t simply reinvent the wheel. 2. Don’t plagiarize an existing model and 3. Don’t make incremental changes – be bold.

I’d agree with all of that but there’s something that Joe didn’t say – perhaps because he didn’t want to blow the Taulia trumpet too overtly – so I’m going to say it for him.

When I look at the three characteristics that Joe describes of a disruptive company and look for these characteristics in his own company, I don’t really see them – not all at least. Taulia uses cool and contemporary technology to facilitate dynamic discounting – exchanging early payment between businesses for a lower price. The thing is, that’s not exactly new. Supply chains have operated on discounts for decades. It is fairly standard practice. And banks have offered what amounts to the same thing for years too – facilitating ways of leveraging the financial supply chain to the mutual benefit of buyers and suppliers.

Taulia’s offering is, in many respects, a reinvention of a wheel and their critics would say that Taulia is no more different from other supply chain finance models than Google+ is to facebook. Yet Taulia is a disruptor – in a very big way.

Taulia have taken an existing concept, polished it up and put it in a contemporary package then taken it out of its familiar supply chain context and put it into treasury management context. Suddenly it’s “Whoa! –we didn’t know you could do that”.

Taulia haven’t said to the market “OK banks, we can do supply chain finance better” they’ve delivered a proposition to the market that says “OK industry – who need banks?” That’s disruptive!