The social media wake up call

Posted at 05:16h in Social Media by Pete Loughlin

You can always tell when something new is here to stay when the older generations call for it to be banned. The riots in the UK this week, quite apart from being a huge wake up call for the British government, has been an eye opener for many about the power of social media.

This week, many of us in the UK witnessed at first hand the terrifying spectacle of a society on the brink of collapse. This isn’t an exaggeration. While in the grand scheme of things the violent disorder was actually fairly isolated, in the major cities of England including London, Birmingham and Manchester, law and order was suspended and the mob ruled. But we also witnessed something else. It was a rumour mill like nothing I’ve ever experienced. Twitter became a medium to spread news, gossip and speculation so quickly that the news media couldn’t keep up. It became impossible to separate fact from the foundless rumour.

According to some of course twitter and Blackberry Messenger were the cause of the riots. Steve Kavanagh, the deputy assistant commissioner of the Metropolitan police, told reporters this week that “Social media and other methods have been used to organise these levels of greed and criminality”.  There has even been serious calls to place controls on social media to prevent its criminal use – a ban on BBM – a curfew on twitter.

This is missing the point entirely. Twitter didn’t incite a riot. People incited a riot. Whatever the underlying causes, whatever the reasons for the riots (and anyone who claims to know all of the answers doesn’t understand the questions) social media was not one of them. Of course the ringleaders took advantage of social media just the same way the brave people of Clapham were mobilised and took to the streets with their brooms in defiance of the mob. 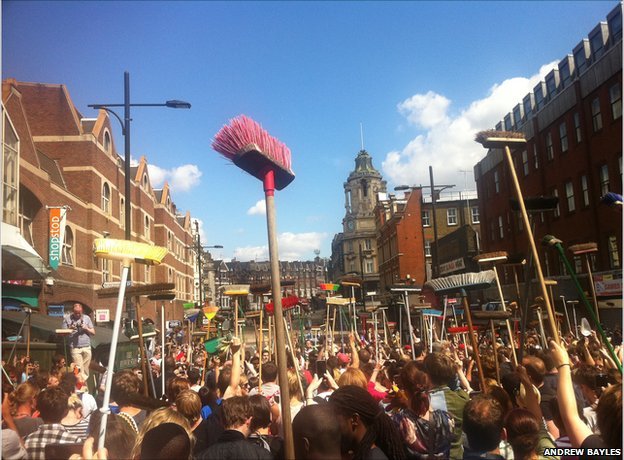 Unexpectedly, twitter has become the most powerful communication medium on the planet. Banning it is pointless. It like suggesting we ban mobile phones or ban newspapers. Not only would it be political suicide for any western government to attempt it and even if it was practical, behind twitter would be another social medium to replace it. Social media is very much with us for the long term.

We try not to go too far off piste in Purchasing Insight but for social media we make an exception. We’ve written about it before because we maintain that business just doesn’t get it. It’s not a topic that is directy purchasing related but anyone in business, in whatever capacity, who isn’t recognising its importance is behaving like the executives in the late 1990s who thought the internet would never amount to anything.  Setting up a facebook page does not give you a tick in the box for social media – it’s a serious force to be reckoned with. It can create or destroy corporate reputation in hours and if it’s power to mobilise society doesn’t convince you, nothing will.