Rob Bernshteyn and the Coupa Coup

Posted at 15:56h in Coupa, Procurement Software, Purchase to Pay by Pete Loughlin

It was quite a coup (pun intended). It was by no means a certainty that Coupa’s initial public offering would be so successful but I think even the most optimistic would not have dared to expect how things played out. At the 11th hour the IPO valuation was raised from $14-16 a share to $16-18 and today, just a week after their entrance on the stock market they’re trading at nearly $30 – that’s a market capitalisation of $1.5 billion.

Jason Busch’s assessment of the IPO and the implications for others in the future makes an interesting read. Personally, I was nervous. I’m not a market watcher and certainly defer to people like Jason for insights on such matters but I feared that Coupa going public would mean that they’d be beholden to investors who they can’t choose and simply become another Ariba or Kofax (both of which companies no longer exist independently). They’d be focused almost exclusively on quarter end results and if that means pissing off customers – so be it. But that doesn’t seem like it’s going to happen. 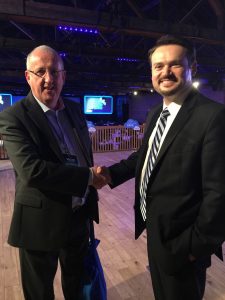 I attended Coupa Inspire in London this week. Rob Bernshteyn opened the event by asking “What do you do after a successful IPO? Find the biggest brewery you can”. He was of course alluding to the venue, the Brewery in London – a very cool venue in a very cool part of London.  I had an interesting chat with Alex Kleiner, General Manager EMEA for Coupa. I explained my concerns about the IPO. “It’s a double edged sword” he explained, partially agreeing with me that while an IPO brings valuable capital that can be deployed to do things bigger, better and faster, it does bring with it some new nuances in terms of pleasing investors. “But this isn’t going to change the Coupa culture” he said. “We’ve always had a public company mentality.”

That was good to hear. Coupa is one of the most customer oriented business I know in the P2P world -they’re not alone but they are an exemplar.

I’m not sure if I’ve ever shared this with anyone privately or publicly before but it seems appropriate to do so now. When I first met Rob Bernshteyn, it was over the phone. He wanted to brief me on the Coupa story. That was about 5 years ago – 2010 or 2011 I think. I loved the “value as a service story” but the overwhelming impression I was left with was that Rob was an angry man – perhaps even a little bitter, like someone who had something to prove. It was a phone conversation so there was no body language to read and I may have got it completely wrong. On the few occasions I’ve met him face to face he’s been nothing but relaxed, charming and happy. So when I met him this week and was able to congratulate him personally, it wasn’t just the IPO I was congratulating him on, it was the 7 years of his life that he’s spent proving whatever it was he had to prove. And even if I’m completely wrong and Rob’s motivation was not to prove anything, he has proved something – that business success is not incompatible with being a really nice bloke.