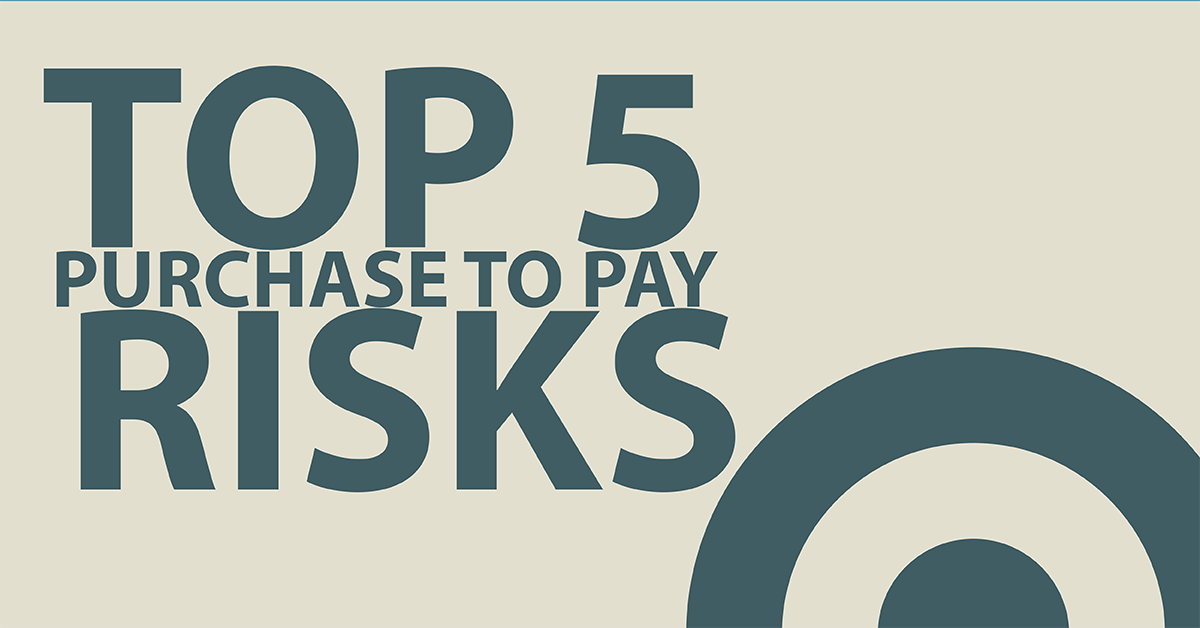 Posted at 04:33h in Purchase to Pay by Pete Loughlin

Purchase to Pay risks are the enemy of any P2P project. Understanding them and knowing how to tackle them increases your chance of success.

Sweep them under the carpet. Cross those bridges when you get to them. Leave it for another day. This is exactly what your consultants will do. And this is why implementation projects fail and why consultants get a bad reputation for leaving an unfinished mess behind them.

Project risks are the business equivalent of the school bully. Most are adept at pretending they’re not there and avoiding them. Some fall victim to them but the only way to deal with them properly is to face up to them and beat them.

These are the top 5 Purchase to Pay risks – the bridges left uncrossed, the unconfronted problems to tackle another day, they are the things that in theory, may never happen but in reality, absolutely will.

Understand them, know them, own them and beat them.

1. Lack of Purchase to Pay ownership between Finance and Procurement

They both own it and neither of them own it. Finance and procurement can act like North and South poles on a magnet. Even though they are part of the same organisation pulling in the same direction, they are at opposite ends of a business priority spectrum.

P2P has 2 Ps – Purchase and Pay. But most P2P projects are actually P2 or 2P – they are either driven from a procurement perspective or a finance perspective. Holistic purchase to pay isn’t usually a thing. P2P is a concept – a string of processes that span different parts of an organisation. If P2P is led, managed or controlled by finance, it is characterised by control and accounting. In contrast, when procurement lead P2P it will be all about business imperatives – decisiveness overrides strict controls. These two different priority sets create a tension and more often than not one party remains passive delegating decisions to the other. The result is long term loose ends, problems with compliance when trying to put agreed ways of working into practice and the emergence of maverick processes.

The different viewpoints of finance and procurement need to be embraced and fully integrated into the solution from the outset. This thorough approach will slow things down. It will be frustrating. There will be tears. But it will pay off in the long run.

All suppliers might not be as enthusiastic to embrace your Purchase to Pay vision. Different electronic invoice standards don’t help. A lack of interoperability creates barriers to cooperation and local legal obligations that impose special arrangements add to the reasons for suppliers to hesitate before jumping into every P2P relationship with every one of their customers.

Even in a mature world that generally embraces the digital economy, suppliers are being asked to conform to a variety of ways of trading electronically. While it is relatively easy to persuade a supplier to accept a purchase order in any format – after all, they don’t want to turn your business away – telling them how to send invoices to you is another matter. It isn’t just that you are telling them how to run their business, an invoice is a legal document that they have responsibility for. There’s often tax information on it and they have an obligation to record and store it. If they want to send an invoice to you on paper, there’s not a great deal you can do to stop it. Of course, suppliers want to cooperate with their customers and although the business case for sending electronic invoices is not as compelling as the business case for receiving them it is in the suppliers’ interests to collaborate. Suppliers will usually comply with a polite request but electronic invoicing isn’t free. Suppliers have to configure the e-invoice in your format. They have to build a connection and test it. That effort can range from a simple piece of work to a project. Ask them to do it when they are busy and they may put you off for a more convenient point in time.

Be respectful of the effort that suppliers have to go to in order to comply with your invoice requirements and pick a suitable time of the year to launch your adoption campaign. Choosing to launch a supplier adoption campaign summer will guarantee slow progress. Avoid calendar year end when suppliers AR departments will be preoccupied with year-end activity.

Scope creep is the enemy of any technology enabled project and P2P is no exception. It is tempting to take the opportunity of a new tool to address all of the problems that have plagued the business for years and even to anticipate new problems to solve.

Take advice from your implementation partner as to how far off piste your process design should go.

There is no point in reinventing the wheel. While every organisation is unique, let’s not get too precious about purchase to pay. It is actually a set of fairly mundane back-office processes that work in more or less the same way everywhere. Sorry to burst that bubble but the way P2P works in your organisation need not be any different from most other similar organisations. Granted, the scope of P2P can extend toward direct categories and for those there are often highly specialised processes but when it comes the indirects (for which most P2P solutions are designed) there is a great deal to be said for implementing out of the box.

One of the advantages of cloud P2P is its inability to customise. It gives you a reason not to consider exotic requests. And if for some reason you are not using a cloud P2P provider it should be recognised that customisation can be very expensive to build and to maintain especially if integrations to other system are involved.

Use best practice out of the box as a starting point and take advice from your implementation partner as to how far off piste your process design should go. Set expectations amongst your stakeholders that non-standard processes will not be used and push back at attempt to shape the solution around existing practice rather than adapting business processes to fit industry standards.

Sometimes people say up front that they are not prepared to change. Others will tell you they will embrace new ideas but their actions don’t match their words. Change isn’t easy and peoples’ reluctant to adapt should be respected. Without understanding their issues you will never be able to tackle them. But tackle them you must. Old, embedded behaviours aren’t just habit – they often conceal very poor practices.

The occasional departure from the rule book is of little consequence and actually has very little impact. But it is the routine divergence from proper process that creates an environment where costs leak through overspends and fraud.

Tackling poor business practices is like trying to tackle litter. Nobody admits to dropping litter and the little that they do drop has little effect. But it is the fact that everybody drops litter that makes our towns and cities a mess. And it’s only when everybody stops littering that the environment improves. The same thinking applies to changes in business process. The occasional departure from the rule book is of little consequence and actually has very little impact. But it is the routine divergence from proper process that creates an environment where costs leak through overspends and fraud. Even petty pilfering has an impact. It isn’t a hanging offence but where it is prevalent and officially ignored, it can be extremely costly. Lax attitudes to contract awards allows unofficial and sometimes inappropriate favours and ‘thankyous’. These perks are threatened by new system controls and it is perfectly understandable that people don’t like the status quo changed. It can take the fun out of the job or in more serious cases take away someone’s supplementary income.

Take change management seriously and go into it with eyes wide open. Putting controls in place is not about lack of trust it is about placing business process in full view. Of course, the low-grade petty pilfering gets eliminated and that might spoil some peoples’ fun but it also removes the opportunity to commit more serious fraud – and that can bring the business down.

5. Purchase to Pay and GRNI

The GRNI accrual can be a good measure of general P2P health. If GRNI gets out of control it could be that P2P processes are not working as intended. Confirming receipt of goods and services that won’t be invoiced for months ahead can tie up capital unnecessarily. Good P2P housekeeping can help to keep GRNI in check.

Users need to understand that short cuts in their own day to day work could have a significant commercial impact elsewhere in the business.

Procurement people can be forgiven for not understanding what GRNI is. If goods are received, the accountants will set aside funds in anticipation of an invoice. In theory, as the invoice arrives and it is matched with the receipt and PO, the accrual is no longer necessary. But GRNI accruals can build up.

It is often a mystery how it is that goods and services can be delivered and not invoiced. A common cause is the receipting of a service that is due to be delivered over a period of time. A requester can, wrongly, confirm receipt of the whole service as soon as the first stage is delivered. This may save some time or even be done through lack of knowledge of the correct procedure but if the invoices are not going to be sent until each stage of the service is fulfilled, this will result in a GRNI accrual. This is a good illustration of how all the connected P2P processes are interdependent.

Make sure that all businesses processes including receipting are designed, documented and trained thoroughly and correctly. Users need to understand that short cuts in their own day to day work could have a significant commercial impact elsewhere in the business.

Download the Top 5 P2P Risks infographic as a PDF. Keep it as an easy reference. Share it with co-workers or print it out and keep it close as an aide memoire.

When you download you'll be joining our mailing list to be kept up to date. You can of course unsubscribe any time and it is completely free.