Learning from litter – creating the new normal in P2P 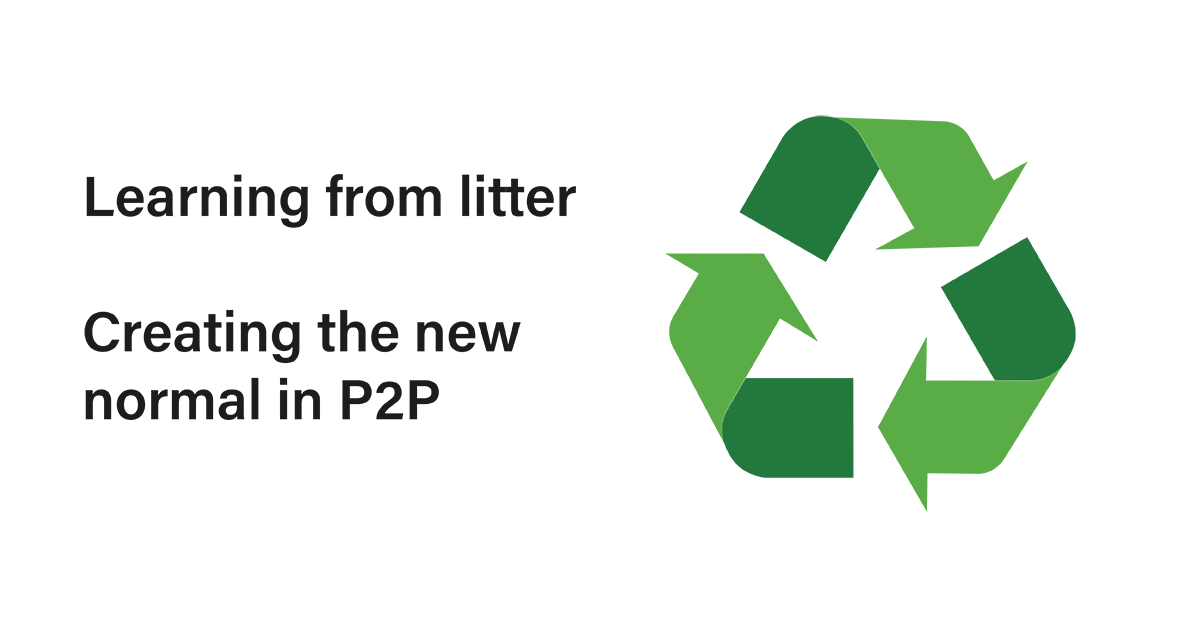 Posted at 11:10h in Purchase to Pay by Pete Loughlin

When I was small, there was a kid I was at school with who was quite normal. He was an unexceptional, average, standard kid – that is until music was played. Then, he’d spring to his feet, dance like he was on drugs and take his clothes off. It makes me a little uncomfortable to recall this but the boys and girls (and teachers I might say) would laugh and cheer and clap at his extraordinary performance. He was, and we were, very young I should point out.

If taking your clothes off in public is just a Pavlovian response to anyone shouting “Hey, Macarena”, you have my sympathy.

I had quite forgotten this lad but was reminded of his behaviour when I saw a grown man, very much the worse for drink, performing a similar routine in a public place to the delight of his drunken friends. Did he, I wondered, learn that stupid behaviour as a child? Was it the enthusiastic encouragement of uncles and aunties at family events that taught him that this is how to make people laugh, how to get people to like you? As a toddler or a young child, this is probably quite true but as a grown up, it is at best embarrassing and at worst, illegal.

But if we’re honest with ourselves, can we not all identify some things that we do, some habits or behavioural ticks that we learned in childhood that we’d prefer to lose? Picking your nose, hiding your teeth or irrational fears and superstitions – it’s not easy to unlearn this stuff and where it is an issue, psychology techniques are important to rewire the brain to help develop new behaviours.

Continually learning is crucial but unlearning is just as important. And just as training people to do things is critical – so is training them to stop doing what they’ve been taught.

This is the change management challenge that faces many businesses as they evolve to embraces new ways of working whether or not they are enabled by new technology. Changing engrained habits at a corporate level can be the most complex and challenging parts change program like P2P and it’s the part of a project that often remains incomplete.

There are a wide range of strategies to affect change at a corporate level and there are many people wiser and more experienced than me who can provide deeper insights however, there is a particular type of challenge that I have seen many times that remains stubbornly unresolved and that’s the situation where someone struggles to adopt new ways of working because their circumstances are “special”.

Continually learning is crucial but unlearning is just as important. And just as training people to do things is critical – so is training them to stop doing what they’ve been taught.

Anyone who has been part of a P2P change program knows what I mean. They know the people that claim to understand the importance and benefits of P2P but for some reason, their circumstances are exceptional. “It’s not the convention in our industry to use P.O.s”; “We wouldn’t be able to get things in the timescale we need them”; “The things we do are far too complex”. All of which is completely true and complete bollocks at the same time.

But you can’t say that.

The thing is, the behaviours that give rise to these objections are learned and engrained. But more than that, it seems to them that changing their behaviour will have little or no effect. “What’s one invoice without a P.O? It’s hardly the end of the world.” “So what if I used a new supplier – the circumstances dictated it and besides, it was quicker than doing it formally.”

I’m as shocked and upset as anyone at the sight of sea life tangled in nylon net or huge plastic islands floating in the ocean but if I’m running a half marathon, exhausted and thirsty and someone hands me water in a single use plastic bottle, I’m going to take it. And I’m going to discard it in the knowledge that that’s someone else’s problem to deal with.

Getting whole communities to change established behaviour is a huge challenge and the key to getting people to use new and better P2P processes and it is closely analogous to the problem of persuading people not to litter. It is about much more than issuing instructions or imposing penalties – to change poor corporate behaviour we need to employ some psychology.

If I’m running a half marathon, exhausted and thirsty and someone hands me water in a single use plastic bottle, I’m going to take it. And I’m going to discard it in the knowledge that that’s someone else’s problem to deal with

There was an interesting study on littering behaviour in the United States. Leaflets were put on the windshields in a car park and observations made as drivers returned to their cars. 33% tossed the leaflet to the ground however, when drivers saw someone else pick up a leaflet disapprovingly, no-one littered. From 33% to 0% with a simple psychological trick. It seems that making it the norm to dispose of the leaflets properly by showing people someone like themselves behaving responsibly has a dramatic effect on changing peoples’ behaviour.

This is the key to effective change management to address the “special case” problem. In a P2P program, make it the norm to raise P.O.s. It should be unacceptable to go off piste from the proper P2P process. Positive reinforcement of compliant behaviour is fine but not nearly as powerful as disapproval from co-workers for non-compliant buying. No one wants to go off piste if their peers get piste off.

We all struggle to unlearn engrained behaviour. If taking your clothes off in public is just a Pavlovian response to anyone shouting “Hey, Macarena”, you have my sympathy. But behaviours can change. When you realise that it not the best way to win friends and admiration you learn that in fact, fitting in and behaving “normally” is a far safer bet.