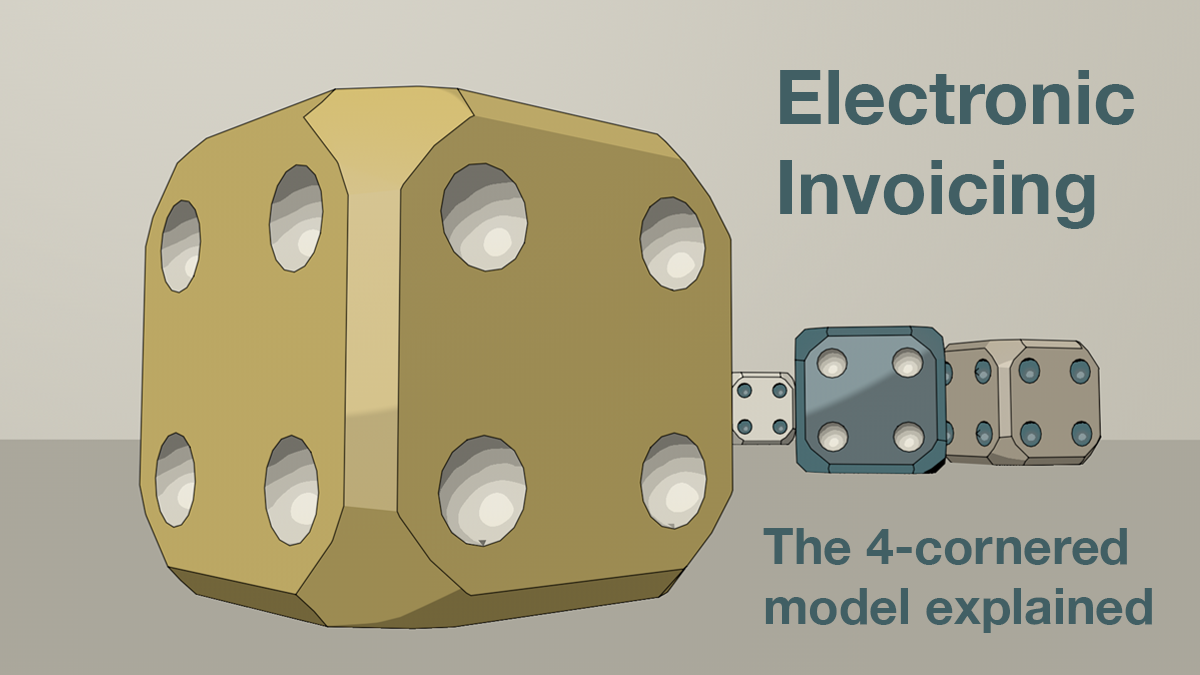 Posted at 06:13h in The Rest by Pete Loughlin

The e-invoicing ‘industry’ has been banging on about the 4-cornered model for years. The so-called interoperable service providers and the great and good of the expert community have used it to describe how a common standard for electronic invoicing can help adoption. But after years of whistling in the wind it is time to call it out for what it is – bleedin’ obvious. (Apologies for my use of idiomatic English).

The 4-cornered model simply uses a construct to describe what happens everywhere else. Interoperability (or the 8-syllable model as I like to call it) is how you can use a mobile phone. It’s how we get stuff delivered from Amazon. It’s how the internet works. The 4-cornered model is about standards, semantics and syntactics – when most of us simply want a discussion about common sense.

If you are comfortable in a conversation about the difference between the syntax and the semantics of data standards, you’ll be fine with the concept of the 4-cornered model. It describes emerging best practice in e-invoicing but for most procurement and finance professionals it’s the unnecessary detail that sits behind trading more efficiently and effectively. Let me explain.

As AP automation continues to gain favour across the globe as part of the ever-increasing adoption of technology in business, electronic invoicing has become a key component. But over the last couple of decades, it’s growth and adoption has been frustrated by competing standards, legislation and commercial models. Interoperability – the ability for different technologies to work together – has been perhaps the biggest stumbling block.

To describe the issue, the e-invoicing industry has used a concept that they call the 4-cornered model to describe how interoperability works and to contrast this with the 3-cornered model which is not interoperable. You can see an explanation of these model below however, I think that the concept of interoperability as it is used in the context of e-invoicing can be explained much more simply by comparing it to other examples.

The concept of interoperability as it is used in the context of e-invoicing can be explained by comparing it to other examples.

Many readers will be amongst the millennial set that barely remember a world without mobile phones. In the 1990s when the technology was emerging, a mobile phone tariff was complicated. There were charges for sending text messages, for making calls to others on the same network and different charges for calling people on competitor networks. It was an expensive business. Today, I pay for my phone and my network charge and everything else is ‘free’. My phone together with my network account is my access point to a global black box of technology and commercial arrangements that I don’t need to understand. It allows me to speak to my friend and colleagues, suppliers and customers who use their access point to the same black box to answer the phone. There’s me, my network provider and there’s the person I want to speak to and their network provider – 4-corners of a communication model – and in between the network providers the black box where the magic happens. The telecom industry needs to understand the innards of the black box but from my point of view, they are welcome to it – please spare me the details.

The telecom industry needs to understand the innards of the black box but please, spare me the details.

The interoperable model for the internet is no different. I have my Internet Service Provider – my access point – and so does the computer that hosts the site I interact with. And in between, the internet – the single set of standards that connects us all regardless of the hardware and operating system we use. I don’t think I’ve ever thought of it as ‘4-cornered’ – I just use it. Credit card networks use the same model: The four corners are the cardholder, their issuing bank, the merchant and their ‘acquiring’ bank. Visa or Mastercard sits in the middle.

But it wasn’t always like this, today we take payment cards, the internet and the mobile phone networks for granted because they just work. Less mature technologies – like B2B electronic invoices – still have a mixed landscape and the players that manage the infrastructure still argue about the relative merits of different standards and ways of working – but history tells us which way we’re heading and the sooner we collectively adopt a single way of interacting, the sooner we will all be able to take advantage of the single business ecosystem that is waiting to be exploited.