Posted at 16:20h in Blockchain, Purchase to Pay by Pete Loughlin

I enjoyed attending eWorld in London yesterday to speak on the impact of blockchain on P2P. Blockchain is a very popular topic and we had to be moved to the largest conference room in the QEII to accommodate to large number of people that chose to attend my presentation. 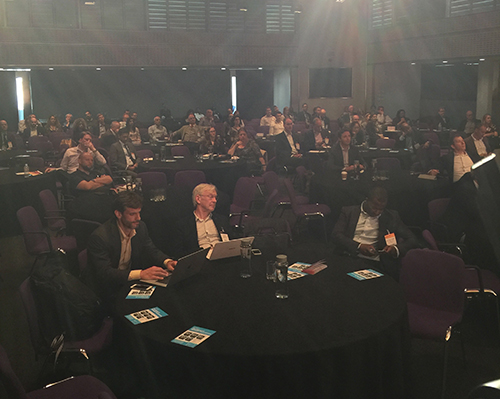 While I was well received, the front row didn’t seem to be that engaged. That’s Jason Busch attending to his emails and Peter Smith catching up on some sleep.

I’ve given this presentation a few times this year and it’s interesting that as each time I present, the quality of questions gets better. There really is a consensus developing that blockchain will have a major impact on Purchase to Pay, Supply Chain and many other areas of business. And it’s not going to be an incremental impact – there will be a big shake up.

I am reminded of the early 1990s when it was becoming very clear that the internet would be very important. Everyone knew that but the only killer app was email. Ten years later and it had transformed industries. It contributed to mass globalisation, made supply chain slicker and retail changed fundamentally. A further 15 years later the entertainment industry was unrecognisable as ubiquitous broadband facilitated ubiquitous streaming.

There are many predictions of what blockchain will do. If you believe the futurists, in the P2P space it’s going to make invoicing, accounts payable and even auditors obsolete, democracy will be transformed and banks will disappear. Some of these things might happen at least in part but based on my recollection of the maturity of internet applications the only thing we can be really sure of is that we haven’t got a clue. If we’re at that “email stage” – bitcoin being the killer app – then the realer blockchain use cases that will change the world haven’t even been thought of.

By the way, if you’ve not seen this before, this is a part of the presentation I gave: